Political corruption is the use of power by government officials for illegitimate private gain. Misuse of government power for other purposes, such as repression of political opponents and general police brutality, is not considered political corruption. Neither are illegal acts by private persons or corporations not directly involved with the government. An illegal act by an officeholder constitutes political corruption only if the act is directly related to their official duties, is done under color of law or involves trading in influence. Forms of corruption vary, but include bribery, extortion, cronyism, nepotism, patronage, graft, and embezzlement. Corruption may facilitate criminal enterprise such as drug trafficking, money laundering, and human trafficking, though is not restricted to these activities. The activities that constitute illegal corruption differ depending on the country or jurisdiction. For instance, some political funding practices that are legal in one place may… (via Freebase) 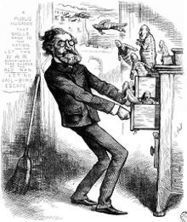 Your ‘Family Rights’ believing in the best interest of children. The issues which are important to me are, children and their families, the injustices to parents, which may occur, because of inadequate information, mistakes or corruption. This is happening every day. every minute and every second.
View all posts by towardchange →
This entry was posted in Family Law and tagged Freebase, His Honour Judge Stephen Waine, Human Trafficking, local authorities, Political corruption. Bookmark the permalink.