Betrayed, Gulf War hero who is being forced to leave UK: Soldier’s Canadian wife and their three children are told to go because he is no longer in the military 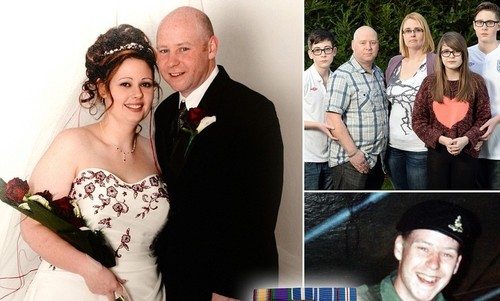 He served in the British Army for 22 years with an ‘exemplary record’, risking his life in both Gulf Wars.

But despite his sacrifice, Ray Coulson’s young family risks being torn apart by an extraordinary decision from the UK Border Agency.

The 42-year-old’s Canadian wife Shainie and their three children have been ordered to leave Britain – because he is no longer in the military.

Officials rejected Mrs Coulson’s application to remain in the UK claiming the teaching assistant had not ‘lost ties’ with her homeland.

Instead, the UKBA suggested Mr Coulson should endure a ‘degree of hardship’ by ripping up his roots and relocating nearly 4,000 miles to Canada.

His supporters have urged ministers to intervene, pointing out the decision is at odds with the Government’s pledge to uphold the Military Covenant –  Britain’s duty of care to its servicemen.

Campaigners contrast his case with that of foreigners who have been allowed to stay in Britain despite dreadful crimes, such as Iraqi Aso Mohammed Ibrahim, who left a girl of 12 to die under the wheels of his car.

Mr Coulson said: ‘I feel like I’ve been betrayed. It’s unbelievable that you can serve Queen and country for so many years, risk your life by getting shot at on the front line, make endless sacrifices for the nation and then be told you can’t have your family live here with you.’

Mr Coulson, a bombardier, fought in both Gulf Wars. During the second conflict, he was part of the 3rd Royal Horse Artillery and regularly found himself under fire as he transported missiles to the front line.

In 2006 he married Shainie, now 36, while deployed at the British Army Training Unit in Alberta, Canada.

He was posted back to Britain three years later, and in 2010 Mrs Coulson and their Canadian-born children, Blake, 14, Bailley, 13, and Kallum, 12, joined him near his  barracks in Tidworth, Wiltshire.

The Home Office granted her three years’ discretionary leave to remain in the UK.

In 2011, Mr Coulson ended his stint in the Army and the family moved to Leeds.

He became a telephone engineer and his wife is a teaching assistant.

In November last year Mrs Coulson’s leave to remain was about to expire so she applied to renew it.

But the family were stunned to learn last week that this had been rejected by the UKBA.

Officials accepted the couple were in a ‘genuine and subsisting relationship’.

But in a letter explaining the decision, Miss K Pickersgill, on behalf of Home Secretary Theresa May, said: ‘You and your children would return to Canada as a family unit and continue to enjoy your family life together.

‘Whilst this may involve a degree of disruption to your private life, this is considered to be proportionate.’

Miss Pickersgill told her that relocating to Canada ‘may cause a degree of hardship for your British partner’ but she concluded there were not ‘insurmountable obstacles’ to prevent this.

Last night Mr Coulson said: ‘I find it extremely unfair that because I am no longer in the Army we are being discriminated against and my family has to be broken apart.’

The family plan to appeal the UKBA decision. Home Office sources said Mrs Coulson might be able to return to Canada to apply for a marriage visa, which would allow her to live in Britain.