The Methods Of Suppressing Free Speech And Tommy Robinson.

The Methods Of Suppressing Free Speech And Tommy Robinson. 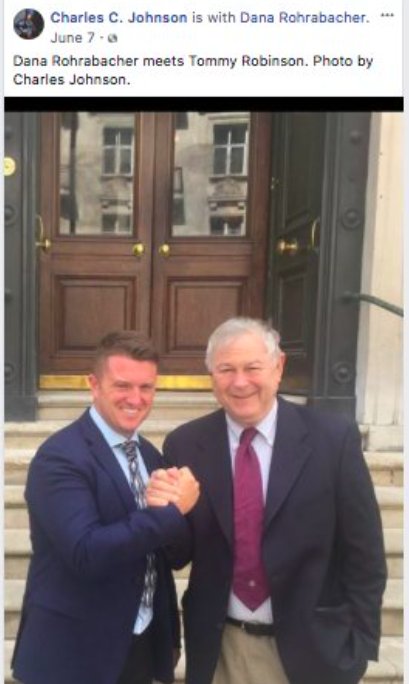 Wow. Plot thickens. Haven’t seen this before. It’s Yaxley-Lennon aka Tommy Robinson on steps of Ecuador embassy meeting Dana Rohrabacher aka “Putin‘s favourite congressman”. This was trip Rohrabacher made to Assange to try & intercede on his behalf with Trump. (h/t @klickedy)

Free speech is of no value if nobody is allowed to listen to the speech. Suppression of free speech tends to occur through political or legal means. Censorship is primarily technological.

No administration in memory has more thoroughly undermined freedom of speech and of the press than that of President Obama. It is the example of the Administration itself that is most notable. Who could forget the performance of then-UN ambassador Susan Rice who, five days after the Benghazi attack that took the life of the American ambassador, went on national TV and blamed the attacks on an anti-Islam video shown on YouTube?

There is more than one reason why people living in democratic states oppose fascism, but the main reason is that in a fascist dictatorship the individual citizen has no guaranteed rights. If you say the wrong thing or oppose the wrong person, you can be arrested or killed without a fair trial.

Some people believe that fascism would not be a terrible system if you always do your duty and you never oppose the government. However, the problem is that people can be corrupt. Everything looks good in theory, but in real life innocent people can get into serious trouble with the government when there is no guaranteed right to a fair trial. wikipedia.org

Tens of thousands joined the national demonstration against fascism and racism in London last Saturday.

The ways of combating suppression of free speech and censorship must also differ. Censorship is primarily technological, and thus technological answers may be found to prevent censorship, though making it politically or legally unacceptable can work. Suppression of free speech, on the other hand, is primarily political and legal, and in order to truly win the battle for free speech, political and legal power will need to be brought to bear.

Your ‘Family Rights’ believing in the best interest of children. The issues which are important to me are, children and their families, the injustices to parents, which may occur, because of inadequate information, mistakes or corruption. This is happening every day. every minute and every second.
View all posts by towardchange →
This entry was posted in Family Law and tagged Author, combating suppression of free speech, fascism, The Methods Of Suppressing Free Speech And Tommy Robinson, The Methods Of Suppressing Free Speech, youtube. Bookmark the permalink.