Have You Been Treated Roughly By Your Family Court Solicitor?

Have you been treated roughly by your Family Court Solicitor ? It Is Time To Talk, Rate & Review.

The best ways to warn consumers of the perils of using lawyers who fail to disclose their history to clients, is to inform the consumer. Client confidential allows them to withhold client history from you. This is their private business, would you not agree?

via Scotland’s Judges To be Asked For Views On Their Own Lack Of Transparency Over Personal Interests..

How The Corrupt Judges Breach Human Rights And EU Law To Pander To The Wishes Of Social Workers.

There is no hope for a system that corrupt as to allow such thing to happen on a daily basis. Maybe one day there WILL be some true movement to cleanse the festering pustule from the cafcass of the Family Court system.

The evidence is irrefutable but getting some one to pick it up and use it is like trying to get a passer by to pick up Dog Dropping with their bare hands. !

In my humble opinion these are not honourable people merely Jaded money Grubbers wearing the badge of office just for the standing it gives amongst their peers.

Many are So ignorant of the LAW that they do as their CLERK recommends.
There is and will be No true Justice in the Family system until these lazy slacking Trough snuffler’s are exposed and brought to book for their indifference to their standing and position of trust.

Trampling On Our Human Rights 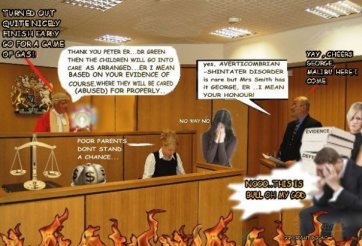 Have You Been Treated Roughly By Your Family Court Solicitor?

6 Responses to Have You Been Treated Roughly By Your Family Court Solicitor?